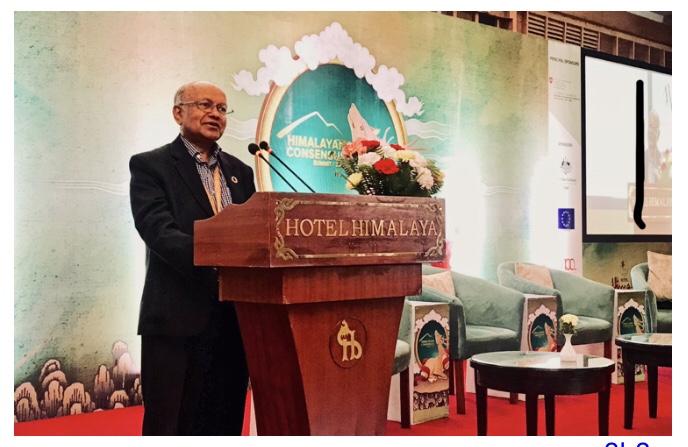 This has been an exhilarating Summit with many inspiring and some intriguing presentations on the brave new world of the future of work, regeneration of our damaged environment and imagined wonders of the circular economy.

We also heard some warning signals of worrying and even alarming trends of the melting of the Himalyan glaciers, extreme weather patterns and sudden-onset hazards threatening people’s livelihoods leading to increased out-migration.

I hope the younger participants here are not discouraged or disheartened by some of the gloomier forecasts particularly on climate change.

As I like to err on the side of optimism – I wish to focus on some exciting positive prospects and invite us all to imagine a different, more hopeful future scenario.

Listening to the many presentations, I feel inspired to share with you a dream – a dream that if we play our cards right, the Himlayanregion could be the world’s first fossil-fuel free zone by 2050.

Our nearby Bhutan and far away Costa Rica – both small and beautiful – have shown early signs of what can be done , and so have many innovators in California and elsewhere.

The Himalayas have all the renewable resources we need – plentiful sunshine, roaring water resources, gusting winds as viable substitutes for a fossil-fuel economy.

What we lack and need is to cultivate more enlightened leadershipand ambitious vision, and harness new technologies, including artificial intelligence, both to create new kinds of jobs and new ways to protect the environment.

I believe that the dream of a pristine Himalayan Shangri-la for our children and grand-children is still within reach.

With a billion people under its canopy, the Himalayas can show the world that it is not only imaginable but doable to regenerate and protect our environment.

It will not be easy nor without challenges, but it is conceivable.

This may sound utopian – when we see at present our great metropolis in the Himalayan foothills like Kathmandu, New Delhi, Dhaka, Islamabad, etc. choking in smog, littered with garbage, entrapped with gas guzzling vehicles, even as many people are mired in poverty and growing inequality in the midst of the ostentatious life-styles of our rich and wasteful elites.

That is certainly our reality today, but we are not doomed to that as our destiny.

Yes, we have become a wasteful, consumerist society. Consumerism encourages us to consume in ever increasing quantities and throw away barely used clothes, computers, cars, cell-phones, toys, food, and other consumer goods and acquire ever new models and brands.

As soon as a new model of I-phone or a car or laptop or designer clothes hit the shelves we throw away our barely-used and perfectly working possessions to acquire the latest models.

The mountains of such products fill our landfills, spoil and destroy our environment, and lead to extraction of more raw materials to produce new ones.

This is already a grave threat to our environment. But we can imagine a future economy based not on endless extraction of more and more raw material, minerals, and cutting down of trees from our already wounded, scarred and disfigured Mother Earth, but largely by recycling old or barely used commodities to produce newer models of the same or other commodities.

That is one way to look at the circular economy.

I was recently in Panipat, Haryana in India where I witnessed mountains of used clothes shipped from all over Europe and North America being recycled.

Every piece – the buttons, the zippers, and clothes of different colours and sizes – were meticulously separated by thousands of mostly women, both in their homes and in community settings.

Originally, these clothes were stitched in places like India, Bangladesh, Cambodia, Indonesia and other developing countries and shipped to department stores and fancy boutiques in Europe and North America.

After being re-cycled in Panipat, the used clothes turn into new yarns and are reused again in the carpet and garment factories and shipped back to Europe and North America as brand new carpets and fancy clothes.

There, we see an example of the circular economy.

Imagine doing the same with all the barely used mobile phones, computers, cars and other consumer goods.

Such process requires both the labour-intensive work creating employment, and environment-friendly high-tech solutions that can create new kinds of jobs that we can barely imagine today, or changing our lifestyles as many speakers have suggested.

This may sound rather far-fetched and utopian. But let us remember the greatest transformation in human history is shaped by utopian dreamers, not by conservative realists.

Those who thought slavery could be abolished, colonies could be liberated from great empires, women should have the right to vote and demand equality, sovereign states should be compelled to abide by international treaties and concepts like the “responsibility to protect” – they were all considered utopians by most of their contemporaries.

Let us also remember that a revolutionary idea of one generation often becomes the common sense of the next one.

And I trust that you share my dream – of a fossil-fuel-free Himalyanregion by 2050 – where our grand-children and their children can live in harmony with the pristine environment, yet have a decent and dignified life bestowed by a circular economy with the help of new technologies and human ingenuity.

We count on our young leaders and activists – our own Himalayan Greta Thunbergs – to help make this dream a reality.