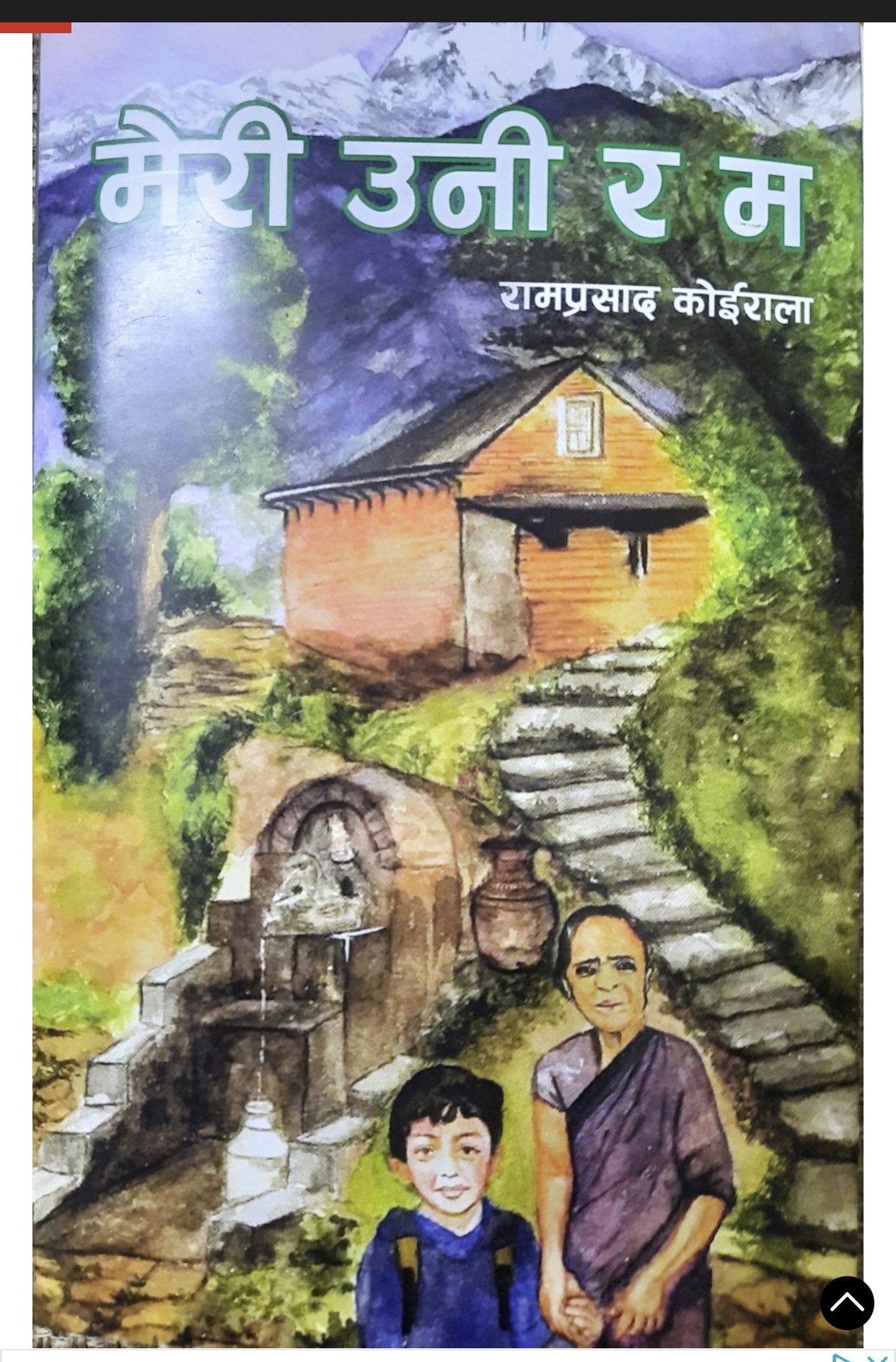 A gripping and enchanting memoir

Ram Prasad Koirala’s autobiographical memoir in Nepali ‘Meri Uni ra Ma’ is a fascinating account of a village boy who grew up in the remote hills of rural Nepal, studied hard, became an engineer, served in irrigation and water supply projects with the government of Nepal, and went on to have an exciting career in several countries of Asia and Africa with the United Nations Children’s Fund (UNICEF).

The most touching and gripping parts of the story relate to how the author became estranged from his mother soon after his birth but was affectionately raised by his illiterate but exceptionally compassionate and wise grandmother, who became a lifelong source of inspiration for him.

The book starts in a dramatic manner with Ram’s mother making a shocking confession to his father about an incident in which she had been unfaithful to him. It then paints the picture of the highly unfair double standards in Nepali society, where any indiscretion or even involuntary infidelity by women was treated with unforgiving social stigma and even imprisonment. In contrast, men could legally practice polygamy and suffered no stigma for their extramarital transgressions.

As a baby, little Ram was unaware that the prevailing circumstances of Nepal in the 1950s had led to his mother being imprisoned for two years on charges of marital infidelity and exiling herself to a new life of anonymity in the faraway city of Bombay in India to escape the indignity and stigma in her homeland. When Ram learned about all this in his adolescence, he was shocked, confused, and deeply saddened.

As in all human societies, motherhood and the role of a mother is highly idealised in Nepali society. Mothers are regarded to have boundless love for their children and a figure of reverence prepared to make any sacrifice for the well-being of their offspring. Many poems and epics are written about how maternal love is as deep as an ocean or as high as the sky. But little Ram was bewildered why this seemed not to have applied in his case.

Although he was deprived of the tender loving care of his biological mother, Ram was fortunate to get the most precious gift of love and guidance from his exemplary grandmother, whose compassionate care and folk wisdom left a lasting imprint on him. Her simple, wise, and worldly advice not only shaped his character but became the North Star that guided him to treat people, particularly those who were deprived, discriminated against, and stigmatised in the traditional Nepali society, with genuine respect, empathy, and solidarity.

Some other profound lessons the author learned from his grandma related to the importance of cleanliness, hygiene, sanitation and, above all, the need to protect, preserve, and generously share clean drinking water with one’s neighbours, visitors, and even passers-by who were thirsty while trekking in the water-scarce hills of Nepal.

During his three-decade-long career with UNICEF in Laos, Vietnam, Indonesia, Timor Leste, Eritrea, and Sudan, Ram’s principal assignments were in the field of WASH (water, sanitation and hygiene) as key elements for promoting child survival and development as well as women’s empowerment and gender equality. He recounts how uncannily his beloved grandma’s teachings in his native village paralleled what UNICEF advocates in promoting WASH worldwide.

Indeed, whenever he faced bureaucratic challenges in performing his tasks at UNICEF, Ram often recalled his grandma’s teachings to motivate himself to overcome all hurdles. Besides frequent references to his grandma’s inspiration throughout his personal life and professional career, Ram devotes a whole chapter of the book entitled “UNICEF and Oonisafe” playing on the Nepali words to describe how the organisation he worked for and the person who inspired him most shared so many uncanny common attributes, and both profoundly enriched his life.

Written in a very simple, fluid, and elegant style in colloquial Nepali language, the author candidly pours his heart with disarming sincerity. He resorts to both beautiful poetry and prose to chronicle his sentiments, which may be difficult to translate into other languages, making the book particularly gripping and enchanting to Nepali readers with a literary bent.

There are two places in the book where the author describes his unplanned and accidental meeting and subsequent exchanges with his estranged mother that were so poignant and emotive that I could not hold back my tears. One was when a strange coincidence led him to an emotional meeting with her in Bombay, and the second occasion was when he missed the opportunity to invite her to Indonesia to introduce his wife and children (her grandchildren). The second occasion was particularly heart-wrenching because, unbeknownst to him, his mother had already passed away several months before he wished to invite her with the hope of initiating a final family reconciliation.

His sad and painful estrangement with his mother came to an emotional full circle as he went on to perform the final mourning rites after he learned belatedly of her death. The stoic and philosophical manner in which Ram endured this twist of fate is nothing short of a Shakespearian tragedy.

The book ends with Ram reiterating how his grandma’s teachings repeatedly helped him gracefully confront the most challenging circumstances in his personal and professional life. His grandma was not just an inspiring individual for him, but she also represented the best of womanhood as he witnessed among the many women in rural Nepal who struggled against great odds to preserve a modicum of dignity in their lives.

Ram finds his grandma’s spirit reflected in the goodness of many women who came into his life, including his loving wife, a daughter with a physical disability, and two other kids who became a source of his inspiration and pride.

As an expression of his gratitude to his grandma and the women who inspired and enriched his life, the author recounts how he supports some charitable activities, particularly helping girls and women in his native village of Darunga in the Palpa district, where he grew up.

The book is hard to put down once you start reading it. The author and the highly talented ghostwriters’ team at Kitab Kunj have done a superb job in this odyssey chronicling a common story of a traditional Nepali village life infused with the 21st century global perspective in an elegant, eloquent, and readable manner.