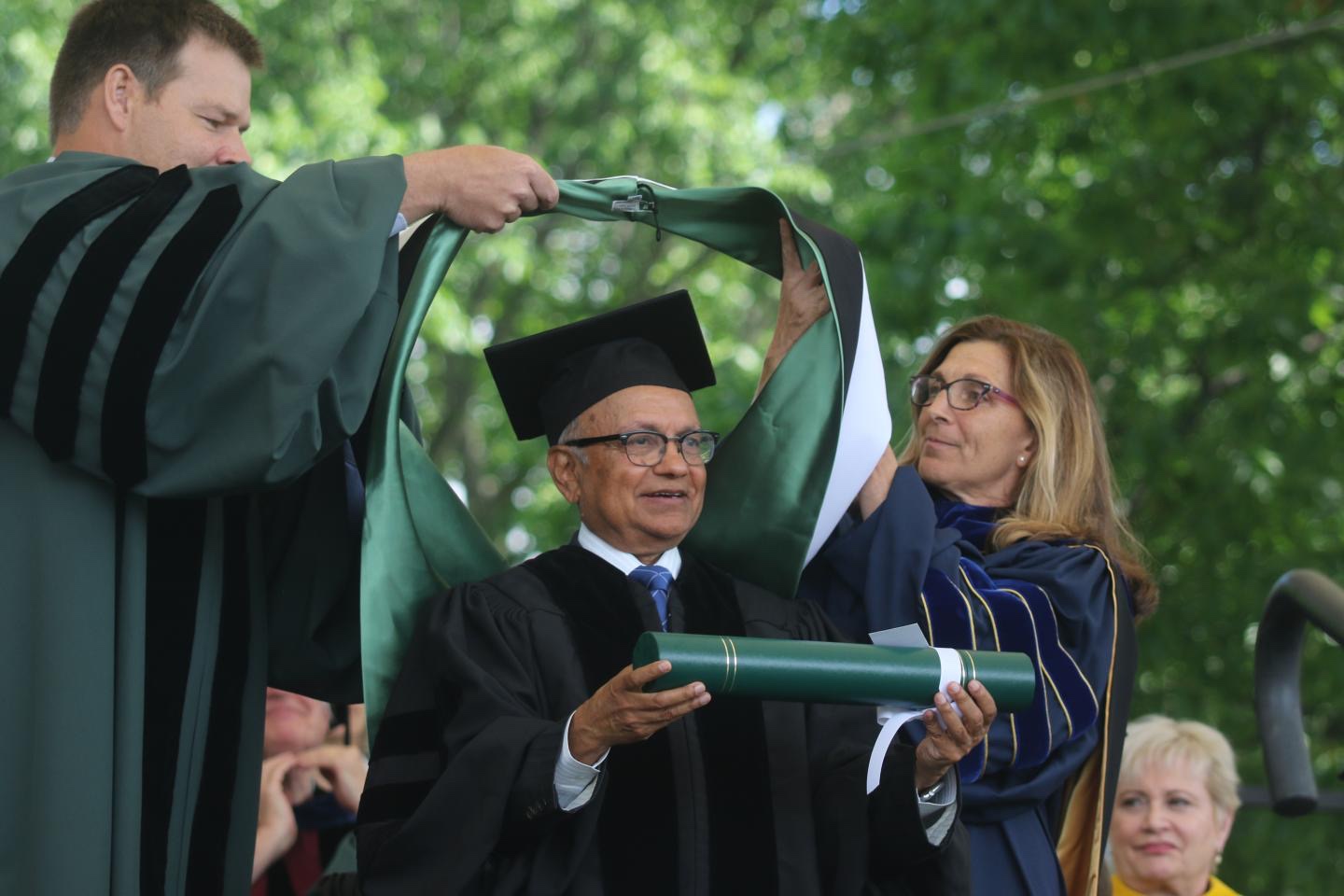 A highlight of our 50th Reunion was classmate Kul Gautam’s receiving his honorary degree. Here is the citation which President Phil Hanlon read and signed:

KUL GAUTAM, as a distinguished diplomat, development professional, and human rights activist, you have proven yourself to be the world’s ultimate citizen-leader, fighting poverty and injustice, fiercely advocating for peace, and significantly improving the welfare of children worldwide.

Born in 1949 in a small village in Nepal, you learned English, in part, by playing Scrabble with Peace Corps volunteers. When one of those volunteers, a Dartmouth ’65 named Zachary Hahn, inspired your dream of studying at Dartmouth, you made that dream a reality.
An exceptionally gifted student, you became the first Nepali ever to be admitted to the College, arriving in Hanover in 1968. You graduated just three years later with a degree in international relations that would serve as the foundation for your life’s work.

You began your career as a program officer at UNICEF in 1973, rising to become both deputy executive director of UNICEF and assistant secretary general of the United Nations in the year 2000. In your 35 years with the organization, you not only played a central role in providing life-saving vaccines to the world’s most vulnerable children, but increased access to education for girls and laid the groundwork for today’s Sustainable Development Goals.
True to your roots, you gave back to your home country as special adviser to the prime minister of Nepal on international affairs and have continued to actively promote human rights, socioeconomic development, democracy, and good governance in Nepal’s civil society.
For your belief in a hopeful future – particularly for the children of the world—and for your lifelong commitment to making that future possible as a humanitarian of the highest order, it is our privilege to award you the honorary degree of Doctor of Humane Letters.

For the video of President Hanlon’s conferral of the degree, and his shout-out to our Class as we cheered for Kul, please click here.
Editor’s Note: On Sunday evening, Kul sent this email to many of his friends, including our classmate Alan Lovell, who forwarded it to me:
Kul writes: “Exactly 51 years after I graduated from Dartmouth College (1968-71), I had the honour to receive an honorary degree of ‘Doctor of Humane Letters’ from my alma mater on 12 June 2022.

“Among seven other distinguished honorees, I had the special pleasure to meet and interact with National Football League star Russell Wilson. My grandchildren Riddhi & Hrig Ved Gautam, too, relished the opportunity to meet this great American football champion.
My wife Binata and daughter Jyotsna were also present at the occasion, as were my UNICEF colleague Jim Mohan, and my favourite Dartmouth Professor Donald McNemar, whose course on International Law first instilled my interest in the work of the United Nations, and his wife Britta.

Editor’s Note: On June 17, I emailed Kul, asking him what it was like for him to receive this degree, what it meant to him, and how he felt on the risers as his citation was read. Here’s his response:

“It was exhilarating to be back on the beautiful campus of our beloved alma mater. I was humbled and doubly pleased to receive the honorary degree and to attend parts of the 50th reunion of our Dartmouth Class of 1972. Meeting so many old classmates after a long hiatus brought back many nostalgic memories.
“And being able to show and explain to my wife, daughter, and especially my two little grandchildren, the paths we treaded, the dormitory where I lived, the dining hall where we ate, the classrooms where we studied, the Baker Library where I spent so many long hours, the amazing sports facilities, and the admin buildings in front of which we protested against the Vietnam War 5 decades ago— was simply amazing.

“My grand-daughter Riddhi Arsheyi Gautam (grade 7, age 13) who accompanied me, has written this brief travelog about joining her grandpa on the visit to his campus to receive his honorary degree and meet his classmates:
Read her Travelog here: