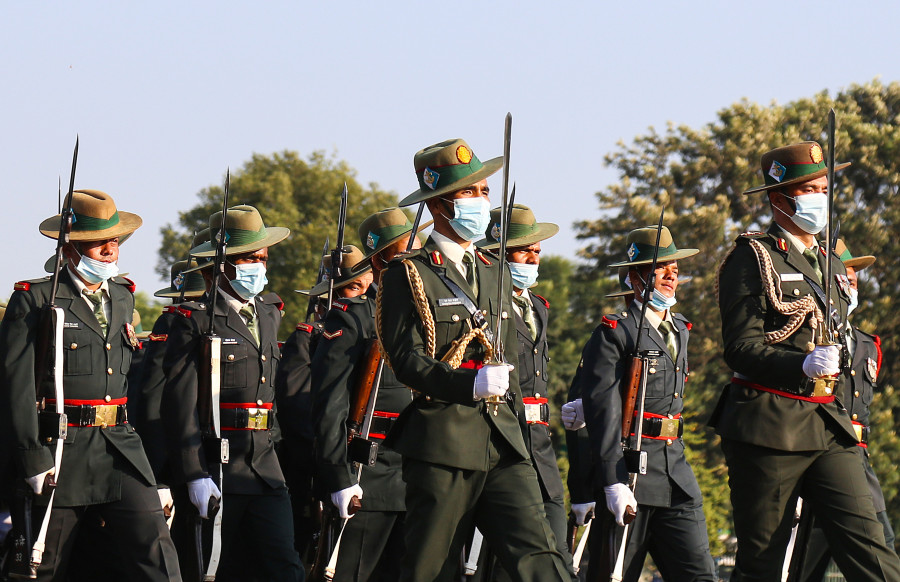 We must make security forces more inclusive and effective to make them more attractive for peacekeeping.

As we celebrate the 15th anniversary of the Comprehensive Peace Accord (CPA) that ended the decade-long Maoist insurgency in Nepal, it is worth recalling both the achievements and the issues that remain to be implemented. One important unfinished task of Nepal’s peace process is the reform and restructuring of the Nepali Army (NA).

The CPA had foreseen that a serious effort would be made to “right-size” Nepal’s security services as part of a broader security sector reform. It had also called for the “democratisation” of the Nepali Army, making it a more inclusive institution, representing the diversity of Nepal’s population. It was expected that the end of the conflict would also reduce our military expenditure, creating a “peace dividend” that would help accelerate Nepal’s economic development.

During the decade-long Maoist insurgency (1996-2006), the size of the Nepali Army more than doubled from 46,000 to over ninety-six thousand. It actually tripled if we count the nearly 40,000-strong Armed Police Force (APF). Our military expenditure increased more than five times. Questions have been raised about whether Nepal needs such a large national army and a paramilitary force during peacetime.

Little progress was made in reforming and right-sizing Nepal’s security services as the NA and the Maoist leadership had fundamentally differing views and expectations. The NA considered the peace process leading to DDR (disarmament, demobilisation and rehabilitation) of the Maoist combatants while the Maoists saw the peace process as SSR (Security Sector Reform).

Initially, both sides stuck to their guns on DDR versus SSR. The Maoists tried to win through the peace process what they could not succeed on the battlefield. Maoist leader Prachanda’s Shaktikhor video message revealed the early Maoist hubris and intentions. The NA and APF frowned on any talk of SSR, particularly any right-sizing or downsizing of the forces.

Following protracted and contentious negotiations, the integration and rehabilitation of the Maoist combatants happened in a relatively peaceful manner with a generous “golden handshake” offered to most combatants. An implosion within the Maoist cantonments against the avarice of their commanders, skilfully mediated by retired NA General Balananda Sharma, made it possible to conclude the military aspect of the peace process fairly smoothly. But Nepal completely missed the opportunity to utilise the peace process for genuine reconstruction and development, as the hoped-for “peace dividend” never materialised.

Past legacy and prospects

It is now unproductive to reopen this closed chapter of the peace process. Nevertheless, it is essential to critically re-examine if Nepal still needs an army and a paramilitary force larger than those of Argentina, Australia, Canada, or South Africa.

The Nepali Army has a glorious history. It played a decisive role in the unification of the country and in defending it against external aggression. Both the NA and the British Gurkhas played an essential role during the two world wars. In more recent times, the NA, APF and the Nepal Police have contributed to international peacekeeping. The NA has also played a valuable role in disaster relief and certain development activities.

Currently, when the public trust and respect for most of our political and governmental institutions have hit rock bottom, opinion polls indicate that the NA continues to enjoy a relatively favourable reputation. It generally respected the constitutionally established civilian authority and did not overtly interfere or intervene in times of multiple political transitions, which is a credit to the NA’s professionalism.

However, its past glory and legacy are not enough to justify the continuation and creeping expansion of the Nepali Army in the rapidly changing security scenario of our region and the world. Instead, we need to reimagine what kind of security threats Nepal will face 10, 20 or 30 years from now and try to reshape and restructure our national security apparatus accordingly.

Nepal’s independence, sovereignty, and territorial integrity are now universally recognised except for minor border disputes. Nepal’s only possible territorial threats would come from our large, contiguous neighbours, China and India. It is a matter of common sense that Nepal’s only defence against any real threats from these neighbours must be our diplomatic strength, not our military might.

In this context, it is no longer necessary or justifiable for this emerging country to maintain a national army and APF over 100,000 for conventional national defence purposes. Indeed, if such a large armed force is retained and allowed to increase further, we run the risk of it becoming a liability rather than an asset.

We have seen, for example, how the bloated national armies of Myanmar, Pakistan and Thailand have become a liability for the human security of the people of those countries. They have become a state within a state—running schools, hospitals, telecoms, shopping centres, and other businesses, including gambling dens and narcotics. One of those countries has nearly 1,000 generals who have a vested interest in ensuring that the security services remain large and continue to grow.

Multiple options can be considered for reforming and restructuring the NA. One radical option would be to consider the Costa Rica model, where the national army was completely abolished while retaining a civilian police force to maintain domestic law and order. That model has worked quite well for Costa Rica, which is often cited as a stable, peaceful and democratic state making significant progress on environmentally sustainable development.

Although intellectually appealing, I would not recommend the Costa Rica model for Nepal at present. Recognising that military service, both in Nepal and in the Gurkha troops abroad, has been an important source of employment and income for many impoverished families in Nepal, we should consider a major redeployment of the NA to meet the real national and human security needs of the country rather than disbanding it.

I would propose restructuring the NA in four equal parts to undertake the following major tasks. First, besides the traditional military functions of defending and safeguarding the nation’s sovereignty and territorial integrity, the NA should protect vital national infrastructure and help maintain peace and security. Second, enhance participation in international peacekeeping and peace-building operations. Third, a much more robust and enlarged role in disaster prevention, relief and humanitarian response, both nationally and internationally. Fourth, help implement specific national development projects of strategic importance, not as general contractors competing with the private sector, but utilising NA’s unique capabilities and expertise.

The NA is already involved in such activities to some extent. What I propose is to assign greater weight to functions second, third and fourth, and enhance NA’s capacity and professionalism in these functions, including through reallocation of the defence budget and human resources to reflect these priorities.

Nepal can and should aspire to become the world’s number one peacekeeping troop contributor. We should also develop the NA’s capacity in disaster prevention, relief, and rehabilitation to make it a world-class institution capable of responding not just nationally but internationally as well. The NA is already involved in some infrastructure construction projects. Its capacity to implement such projects should be further enhanced through small but highly professional Army Corps of Engineers and Medical personnel that can be rapidly deployed in projects that are considered of strategic importance for our national and human security.

The modern definition of national security encompasses the security of a nation-state, including its citizens, economy, and institutions, going well beyond the traditional concept of protecting a state’s territorial integrity within fixed borders. In this era of globalisation, free flow of information, trade and commerce through the Internet, many problems such as environmental pollution, infectious diseases and pandemics, travel across borders without passports or visas. In this radically changed global scenario, ensuring our citizens’ human security must become the cornerstone of our national security.

If thoughtfully implemented, restructuring the NA along the above lines would make it among the most innovative, avant-garde national armies in the world, befitting the glorious legacy of the NA and the famed Nepali Gurkhas to meet the security challenges of the 21st century.

To make the NA, APF and the NP more attractive for international peacekeeping and for tackling humanitarian crises at home and abroad, we must make them more inclusive and effective. Proactively increasing the proportion of well-qualified women professionals in our security services would greatly enhance Nepal’s attractiveness in international peacekeeping and humanitarian response.

NA’s capability and track record in disaster management are mixed. It played an important role in the rescue and relief operations immediately after the big earthquake in 2015. Sadly, the NA was not mobilised effectively when the nation faced the Covid-19 pandemic, the greatest human security crisis of our times.

Predictably, there will be some strong institutional resistance to the proposed massive reorganisation of the NA and APF. We, therefore, need to build a national consensus for such epochal changes. Nepal’s current fragile government and polarised politics are not conducive to making such bold and far-reaching changes in the short run. But I hope that we can plant the seeds now for such changes that would be in Nepal’s best interest over the long haul.