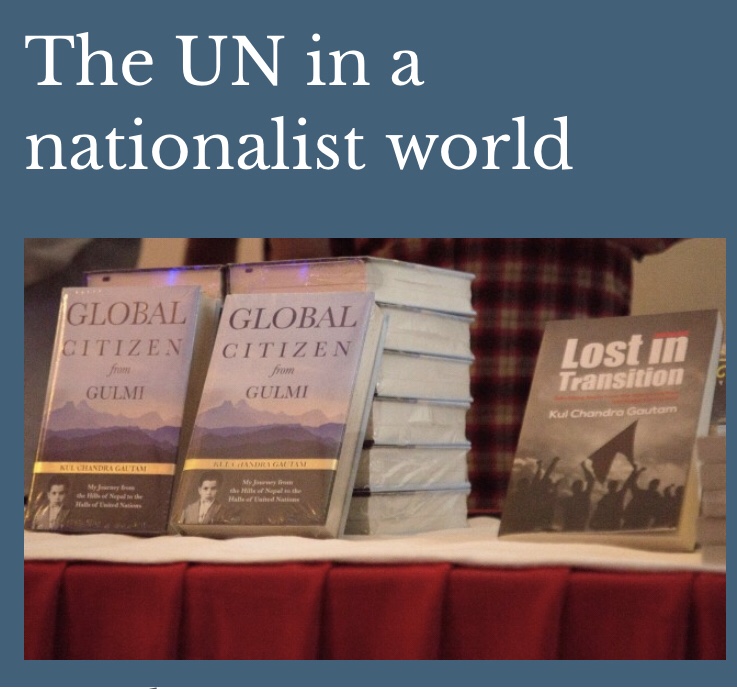 This article is based on speeches Kul Gautam gave at the Frontline Club in London and Institute of Development Studies in Sussex in October 2018.

We live in an era of contrasting realities. The Sustainable Development Goals, approved unanimously by all UN member states, represent unprecedented consensus on what should be the key development priorities for the world. While we have had ambitious goals before – from the first UN Development Decade in the 1960s to the Millennium Development Goals – they were a far cry from universal. Some were seen as relevant only for developing countries. Most shied away from hard issues such as international trade and environmental concerns.

The SDGs, meanwhile, are comprehensive and applicable to all countries. They are largely considered to be evidence-based, costed and affordable. Add to them the Paris agreement on climate change and you have, for the first time, a truly global agenda for sustainable development.

But just as the world has adopted an agenda that requires strong political will and global solidarity, we are experiencing a wave of populist ultra-nationalism rarely seen on this scale since the end of the Second World War and the founding of the UN. If the Cold War undermined the effectiveness of the UN, the current wave of ultra-nationalism is threatening to unravel the whole multilateral framework.

The Cold War lasted almost five decades. It distorted the world’s development priorities and diverted resources from human security to military security. And still, those decades saw the biggest strides in human development, with steady and dramatic progress in all dimensions of human well-being.

Granted, even as we solve old problems, some new ones arise. We managed to eradicate or tame such ancient diseases as smallpox and polio. But new diseases such as HIV/AIDS and Ebola came to threaten us. We abolished slavery, drastically reduced forced and child labour, and made many forms of violence, discrimination and exploitation unacceptable. But new forms of exploitation have emerged or expanded – such as the modern slavery of trafficking and all kinds of cybercrimes unimaginable to our ancestors.

It seems that for every two steps forward, we slide one step backward. But let us remember and celebrate that, on balance, we are making progress. The late Jim Grant of UNICEF used to argue that more progress was made for the well-being of humanity – as measured by indicators such as maternal and child mortality, life expectancy, access to education and other basic services, as well as democracy and human rights – in the last 50 years of the 20th century than in the previous 500 years. And the UN has played a supportive, at times decisive, role in this story.

In that historical context, how long will this wave of ultra-nationalism last? In many countries it is a reaction against immigration – one aspect of globalisation that challenges the sensibilities of nativists. But although this moment seems frightening, I do not believe that it will be a lasting phenomenon, judging by the trends of contemporary human history.

Globalisation is here to stay – warts and all – even as we try to harness its positive elements and prevent the negatives. We all love the benefits of globalisation. We want to travel. We eat food from around the world. We want the latest gadgets, no matter who made them or where they were made, preferably at the cheapest price. We want our children to have the best education and healthcare whoever maybe the provider of such services. We want instant access to information about whatever strikes our fancy and we will not tolerate any attempt to deprive us of that access, even nationalism.

At the same time, globalisation has rapidly increased inequality. A few people have amassed huge wealth and influence, while millions remain in relative poverty, deprived of basic services and opportunities. With rising expectations and access to information and travel, people leave their homes in search of a better future. Migration is part of our eternal human quest for greater opportunity. It can be disruptive. It needs to be managed. But it cannot be avoided. We cannot have free movement of all things – goods, services, knowledge, ideas and technology – but not of people.

Just like managing climate change, managing migration and harnessing it for the greater good of humanity is likely to be among the greatest challenges for policy-makers in the 21st century. Another is the proliferation of destructive armaments, not just of nuclear and chemical weapons but the possibility for easily manufacturing, transporting and unleashing weapons of mass destruction with the help of modern technology and artificial intelligence.

None of these problems can be solved by building border walls and by unilateral approaches. These are problems without passports. Only a robust multilateral system of global cooperation and solidarity can hope to solve such problems.

After the horrendous experience of two World Wars, our forefathers and mothers had the wisdom to create a framework of international organisations, with the UN at its centre. We need to build on, refine and improve these institutions, not to dismantle them in the pique of our naïve, nationalistic or overly idealistic dissatisfaction with their imperfections. Those of us who have worked inside the UN, and those who have studied it as academics, researchers and analysts can certainly point to the UN’s many imperfections, and areas that need to be fixed and revamped.

But the UN continues to be one of the greatest inventions of humanity, and it is an indispensable organisation for global governance in our times – with major achievements. It has mounted over 200 peace operations and facilitated hundreds of international agreements on issues from human rights to biodiversity. It remains second to none in coordinating humanitarian action. Its work in setting global standards has had a more profound impact on our daily lives than most of us realise, in areas including health, education, science, agriculture and commerce.

Smaller and poorer countries benefit from the UN, which enables them to work together and have greater bargaining power on the world stage. Big and powerful countries also benefit from it, because it allows them to play a partnership role and to share the burden and cost of tackling problems such as extremism and pandemics.

But we have to transform the UN if it is to play a fuller role in confronting the challenges of the 21st century.

First, we must democratise the UN. Its strongest organ, the Security Council, has five permanent veto-wielding members. There was some logic to this arrangement when the UN was founded seven decades ago. That logic is no longer valid. Of the many proposals to reform the Council’s composition, my favourite is one put forward by former Singaporean ambassador to the UN, Kishore Mahbubani.

– Seven non-permanent members from among all other countries

However, it should be noted that the composition and powers of the Security Council cannot be changed without the concurrence of the existing permanent members. This would require highly enlightened leadership in those countries, and a sustained global movement to bring real democracy inside the UN itself.

Aside from that, we should focus on making the appointment processes for senior officials – the Secretary-General, heads of major departments and UN agencies, and the heads of the World Bank and IMF – more open and transparent. Some of these posts are considered to be “reserved” for certain nationalities on the basis of historical realities that are now outdated. As a result, the calibre of leaders appointed to these positions is uneven and unpredictable.

Second, we must implement the “responsibility to protect” (R2P) populations from atrocity crimes. Many countries, especially those ruled by authoritarian regimes, hide behind their sovereignty to oppress their people, at times even depriving them of humanitarian relief in emergencies. They should not be allowed to get away it.

In 2005, world leaders endorsed the principle of R2P, agreeing that the international community has a responsibility towards vulnerable people if their government is unable or unwilling to protect them. But the past decade has seen us fail time and again in our promise of ‘never again’, from Sudan, Sri Lanka and Syria to Myanmar and Yemen. The UN and other regional political groupings must be empowered to delicately but forcefully implement R2P, without applying different standards to different countries.

Third, we must prioritise disarmament and development. The UN was founded to prevent war and promote peace. Today, the world is armed to the teeth. Global military expenditure stands at $1.7 trillion per year. That is more than $125 billion a month, or $4 billion every day. Millions of deadly small arms are traded freely in the world’s arms bazaars and are circulating in our neighbourhoods.

Even in times of financial crisis, the world seems to find plenty of money – and no shortage of justification – for grotesque amounts of military expenditure. But when it comes to providing basic services for people’s health, education, employment, and social protection, people are asked to tighten their belts and defer their demands.

The world needs a powerful civil society movement championing progressive disarmament in all countries and calling for this money to be invested instead in human security and sustainable development. If I were granted one chance to amend the SDGs, I would make the very first indicator of Goal 16 on peaceful and inclusive societies a reduction of military spending by 50% by 2030. Costa Rica, which has abolished its army, would top the world.

And finally, we must change how the UN is financed. The UN’s core and peacekeeping budgets are funded by contributions from its members, which are based on each country’s “capacity to pay”. But this assessment is subject to negotiation. Some UN funds, programmes and agencies, meanwhile, are heavily – in cases such as UNICEF entirely – dependent on voluntary funding.

Major contributors have not shied away from threatening to withhold or actually withholding their funding if the UN does not do their bidding. The Trump Administration is the latest to arbitrarily de-fund UNESCO, UNFPA, UNWRA and potentially other UN agencies. Middle powers like Qatar and Saudi Arabia have also used “checkbook diplomacy” to influence UN decision-making.

To avoid such situations, former Swedish Prime Minister Olof Palme proposed a new system in 1985, whereby no country is asked or allowed to contribute more than 10 percent of the UN’s overall budget. This would result in a significantly reduced US contribution, with the shortfall being filled by modest increases in the contributions of other OECD countries and by the large emerging economies.

In addition, the UN should seek to harness funding from the private sector, philanthropic foundations and different types of public-private partnerships. It should explore cloud-sourcing and crowd-funding, which many NGOs now rely upon. And it should investigate seriously the possibility of using schemes like the Tobin tax and resources generated from the global commons.

If we can achieve these four big reforms, many smaller ones would follow, and the UN would be closer to living up to its full potential.

I am encouraged that more and more young people today see themselves as global citizens. If we can prevent the growing economic inequalities in the world from driving them to alienation and extremism, we have a better shot at building a more prosperous and egalitarian world than any previous generation in human history. I am convinced that we have a fighting chance to achieve that – and institutions of good global governance like the UN have a vital role in this mission.

Kul Chandra Gautam is a former senior UN official who served in several countries and continents in a career spanning more than three decades. His book, Global Citizen from Gulmi: My Journey from the Hills of Nepal to the Halls of the United Nations (also photo) was published in 2018 and is available here.