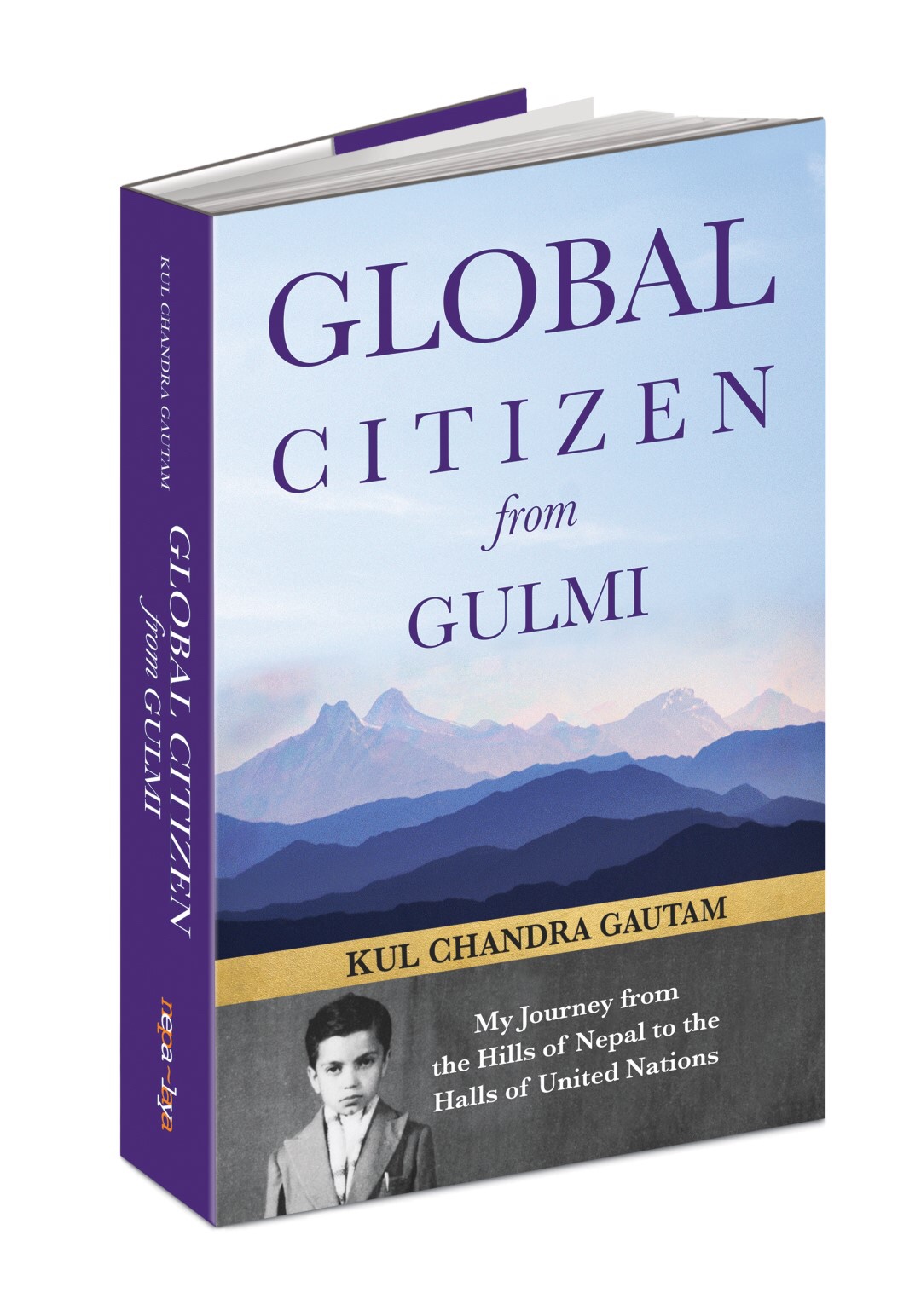 Measles is making a comeback.

Thanks to a range of factors — including poverty, weak health infrastructure, inadequate political will, and delusional anti-vaxxers — a deadly disease that should be consigned to history books is, preposterously, all around the world.

This is especially troubling news for someone like Kul Chandra Gautam. The humble, energetic, and brilliant Nepali man was a key figure at UNICEF during the 1980s, 1990s, and 2000s and was integrally involved in a historic, global campaign to boost immunization for children. Led by the late UNICEF’s former Executive Director and Gautam’s boss and mentor — the initiative is credited with for several diseases (including measles) and saving millions upon millions of lives. It was part of what Grant dubbed the “child survival revolution” and was considered an unprecedented, head-spinning success — one that helped pave the way for a slew of global health and development gains over the last several decades.

Gautam’s new nonfiction book, Global Citizen from Gulmi: My Journey from the Hills of Nepal to the Halls of the United Nations” relates this and many other remarkable stories about the global fight against ill health, poverty, and inequality — and offers unique insight about what makes such successes possible. Part memoir, part commentary, part how-to guide, “Global Citizen from Gulmi” is essential reading for anyone who cares about human progress.

The personal story underpinning this book is a tale of perseverance that is as unlikely as it is inspiring.

Gautam was born in a remote, rural village in Nepal, delivered by an untrained midwife. Like many babies in the developing world, he faced immediate, potentially lethal hurdles: low birth weight, illness, infection. As an infant, he “survived several near-death experiences.”

He offers a potent dose of perspective early in the book: “Most of the children I grew up with never went to school, were never immunized, never saw a doctor or dentist, never flew in an airplane and never even used a telephone. Today their average earnings would be less than USD 1 a day and their life expectancy 10–15 years shorter than mine. Yet I know that many of them were innately just as smart as I was and worked just as hard as I did.”

The distance traveled between Gautam’s childhood and his appointment as an Assistant Secretary-General of the United Nations is immense, and the challenges he faced along the way were Sisyphean.

His unrelenting pursuit of an education (he left home at age 7 to study in a different town) — eventually resulted in acceptance to Dartmouth College in New Hampshire with a full scholarship. Why Dartmouth? He had met a former Peace Corps volunteer who was completing his studies there, and, Gautam writes, “as I didn’t know any other college, I applied to Dartmouth.”

But as it turns out, getting into the Ivy League school was the easy part.

To attend Dartmouth, Gautam had to petition the government of Nepal for a passport — a wretchedly bureaucratic, Byzantine process that ended up taking one and a half years. The delay stemmed from a system that blatantly benefited people of privilege and shut out those lacking wealth or power (Gautam was asked by several different bureaucrats whether he was related to “important people”). Rural villagers typically didn’t get passports.

Gautam’s application was repeatedly denied, eventually making its way to the King of Nepal (yes, you read that right, the King). And the King also rejected it. But Gautam would not be deterred. Having mastered the bureaucratic rules of the game, he applied again and this time was successful.

His doggedness was a trait he would eventually share with his mentor at UNICEF, Jim Grant (a man so famously and maniacally persistent, some thought he was crazy). Both Grant and Gautam became diplomatic masters as not taking no for an answer. This signature tenacity — tempered by an infectious good nature in both men — propelled each from one success to another throughout long careers.

From Cambodia to Indonesia to Haiti to Myanmar (among many other places), Gautam incessantly lobbied those in power to do right by children. Forceful, sometimes even considered controversial, he was unfailingly polite and often managed to wring important victories out of seemingly impossible situations.

In Haiti, this meant collaborating with the nefarious dictator Jean-Claude “Baby Doc” Duvalier. After Grant upgraded UNICEF’s Haiti presence and launched a major child survival initiative in the impoverished Caribbean country in the early 1980s, he chose Gautam as his man on the ground. One of Gautam’s tasks: increase the use of life-saving oral rehydration salts (a key tool in fighting lethal diarrheal dehydration). Gautam and Grant were able to convince Duvalier to get behind the UNICEF program, and Gautam strove to ensure that UNICEF’s independence and reputation survived intact (a challenge he faced in numerous countries with autocratic rulers).

One result of the campaign Gautam oversaw: The use of oral rehydration salts by Haitian mothers whose children had diarrhea rose from 2 percent to 34 percent within the first six months of the program and continued to increase over the next several years. Thousands of children’s lives were likely saved.

But the success in Haiti was about more than saving lives — it was about changing perceptions. Gautam writes: “At the end of three years, we could say confidently that, given concerted and well-coordinated effort, it was possible to make progress in child survival even in a highly corrupt and ill-governed country like Haiti.”

Gautam and his colleagues and partners pulled off similar feats in many other challenging places. In Egypt, he persuaded the Grand Sheikh Mohammed Tantawi of Al-Azhar University to issue a fatwa supporting UNICEF’s work in immunization and another fatwa opposing female genital mutilation — the Sheikh’s word went a lot further than any UN official’s in furthering these two critical objectives. In Southeast Asia, Gautam helped recruit Buddhist monks and temples in the fight against HIV/AIDS. In North Korea, he helped spur dramatic improvements in childhood immunization. Along the border between North and South Korea, he secured the cooperation of an NGO to protect women from abuse and exploitation.

But Gautam’s “proudest moment” — and perhaps most significant achievement — was his contribution to the historic World Summit for Children in 1990, the largest gathering of world leaders ever held at the time. Jim Grant had orchestrated the event and used it to secure commitments from 159 governments to pursue 27 specific, time-bound goals on child survival, health, nutrition, education and protection. These targets would later inspire the UN’s Millennium Development Goals and, in turn, today’s Sustainable Development Goals.

The massive impact of the World Summit over the last several decades is hard to completely capture. Gautam estimates that the summit probably saved 20 million children’s lives between 1990 and 2000; it has also likely saved many more lives since then — the number of global under-five deaths fell from 12.6 million in 1990 to 5.4 million in 2017, according to the UN’s Inter-agency Group for Child Mortality Estimation. These statistics in part reflected a steep reduction in deaths from diarrheal dehydration and plummeting rates of polio, measles, and maternal and neonatal tetanus.

While it was Jim Grant’s vision that spurred much of this progress, scores of other people contributed to it, including immunizers and health workers from all over the globe. A number of UNICEF stalwarts — including Dr. Jon Rohde, Dr. Nyi Nyi, Peter Adamson, Mary Cahill, Richard Jolly, Alan Court, Agop Kayayan, Richard Reid, Gautam (of course), and several others — also played pivotal parts. As for Gautam’s role in the World Summit for Children, he crafted the so-called declaration and plan of action, two documents that became de facto blueprints for the gains made in the decades that followed. He was also intimately involved in monitoring progress and helping plan corrective action when and where that progress lagged.

One important lesson from Gautam’s book and career: don’t be satisfied with limited gains. Think big, be audacious, and, of course, be persistent. I interviewed Gautam extensively for my biography of Jim Grant, and he spoke to me about the criticism Grant faced for tackling unprecedented global immunization goals. Pushing hard for huge leaps in immunization coverage, Gautam told me, made much more of an impact than carefully maintaining minor increases. “If you go from 20 [percent] to 70, and then somehow go down to 60, that is not a disaster,” he said. “It is still better than the so-called sustainable way that many people were pushing, [people] who were too easily satisfied with modest gains.”

Another lesson: progress is not inevitable or guaranteed. The advances that have occurred were not simply byproducts of development or growth — they were painstakingly achieved, despite a growing population, wars, violence, and austerity measures and structural adjustment policies in many countries. As we see with the explosion of measles cases, progress can be lost, squandered, frittered away in a haze of complacency, indifference, and stupidity.