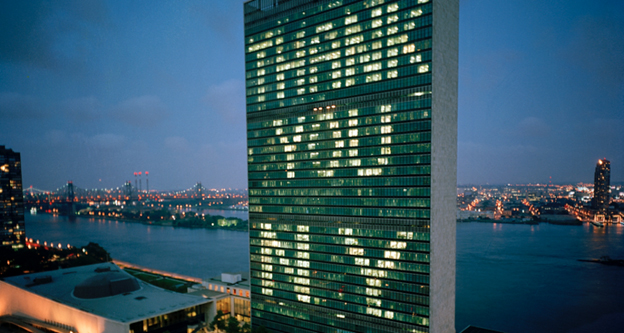 Instead, he opted for a five-letter word dismissing the UN as a “sewer” relegating it to the lower depths of degradation.

In a bygone era, some of the most vociferous rightwing, conservative US politicians never ceased to denounce the world body primarily because of a rash of UN resolutions condemning Israel for human rights violations in the occupied territories or for resolutions mis-perceived as anti-American.

The late Senator Jesse Helms, a Republican chairman of the powerful US Senate Foreign Relations Committee, once said “providing funds to the UN was like pouring money into a rat hole.”

“I disagree with the premises upon which the United Nations is built and with the illusion that it propagates,” Senator Helms, said in a letter to the World Federalist Association. “It would be one thing if the United Nations were just an international side show, but it plays a greater role. It is a vast engine for the promotion of socialism, and to promote this purpose the U.S. provides a quarter of its budget,” he said.

Helms, said he has long called for “our country’s departure from this Organization, and vice versa.”

Charles Lichtenstein, a former U.S. Deputy Permanent Representative to the U.N. Mission, once said he would urge members of the United Nations to move out of New York if they did not like the treatment they were receiving in the United States.

Helms — with tongue firmly entrenched in cheek — said he would join Lichtenstein in waving goodbye to U.N. member- states “as they sail away into the sunset.”

When the 193-member UN General Assembly elected some of the so-called “repressive regimes” as members of the Human Rights Commission (later the Human Rights Council), Congressman Dana Rohrabacher (Republican of California) hollered: “The inmates have taken over the asylum. And I don’t plan to give the lunatics any more American tax dollars to play with.”

And more recently, former President Donald Trump not only decried multilateralism and challenged the effectiveness of the world body but also dismissed it as “a club for people to get together, talk and have a good time.”

Trump pulled out of two historic international agreements: the Paris climate change agreement and the nuclear deal with Iran.

But things have dramatically changed since he was ousted from the White House— and the US is gradually returning to the UN, whose primary home is New York, even though most of its agencies are based outside the US, including in Geneva, Rome, Vienna, Paris, Bonn and Nairobi.

The administration of President Joe Biden, which took over from the Trump administration about six months ago, has not only returned to multilateralism but has also pledged to re-engage both with the World Health Organization (WHO) in Geneva and the UN Educational, Scientific and Cultural Organization (UNESCO) in Paris.

Additionally, the US has agreed to restore funding to the UN Relief and Works Agency for Palestine Refugees in the Near East (UNRWA) and the UN Population Fund (UNFPA), both of which suffered funding cuts under Trump.

Last April, the Biden’s administration said it plans to provide $235 million to Palestinians, restoring part of the assistance cut by Trump. Two-thirds will go to UNRWA, which has suffered a financial crisis since it lost $360 million of US funding in 2018.

In 2016, UNFPA received $69 million in funding from the U.S. And in July 2019, UNFPA expressed concerns over US withholding funds for the third consecutive year The Biden administration is expected to restore US funding.

Penny Abeywardena, Commissioner for International Affairs at the Office of the New York city Mayor Bill de Blasio, welcomed the move by the United Nations to gradually return to near-normal after a 16-month pandemic lock down.

She said “the UN General Assembly has for decades been a staple of Fall in New York and as Host City to the UN, we have always been proud to welcome the international community who gather here”.

Kul Gautam, a former UN assistant secretary-general, told IPS the whole world, including the United Nations, breathed a sigh of relief at the advent of the Joe Biden administration in the US, following four years of the erratic and unpredictable Donald Trump presidency.

Mirroring Trump’s “America First” bravado, his senior diplomatic team, including Secretary of State Mike Pompeo and Ambassador Niki Haley showed little regard or diplomatic finesse in dealing with the complex issues high on the UN’s agenda, he pointed out.

Trump’s National Security Adviser John Bolton had so little respect for the UN that as the US Ambassador to the UN, he had once proclaimed that if the UN Secretariat building in New York “lost 10 stories, it wouldn’t make a bit of difference,” said Gautam, a former deputy executive director of the UN children’s agency UNICEF.

Similarly, his Trump-era successor Niki Haley told a Republican National Convention that the “UN was a place where dictators, murderers and thieves denounce America, and demand that we pay their bills.”

Gautam said in contrast to the Trump-era narrative of the UN being a largely bureaucratic and profligate anti-American organization, dominated by China and Third World countries, the Biden administration quickly proclaimed that “America was back” at the UN and would provide constructive leadership and support a multilateral approach to solving the world’s most pressing issues from COVID-19 to climate change.

Not only is Joe Biden himself a seasoned statesman in international affairs, said Gautam, but his senior aides, including Secretary of State Tony Blinken, UN Ambassador Linda Thomas-Greenfield, National Security Adviser Jake Sullivan and Special Envoy John Kerry are all consummate diplomats who believe in multilateralism.

Mandeep S. Tiwana, Chief Programmes Officer at CIVICUS, a global alliance of civil society organizations (CSOs) , told IPS the United States played a key role in establishing the UN Charter who’s opening words, ‘We the Peoples’, mirror the opening words of the US Constitution. Eleanor Roosevelt stewarded the drafting of what is arguably the UN’s finest achievement – adoption of the Universal Declaration of Human Rights.

“The Trump administration’s disdain for the UN devalued these historical achievements. Traditionally, the United States has been a supporter of rights and democratic values at the UN as core pillars of its foreign policy,” he said.

The Biden administration’s commitment to re-engage at the UN is being welcomed by many in civil society working to challenge discrimination and oppression, he said, pointing out, that it’s a step in the right direction for people-centered multilateralism which lies at the core of the UN’s founding.

Tiwana also said the Biden administration has an opportunity not just to repair the damage of the Trump years but to demonstrate commitment to laying the ground work for the ambitious advancement of justice, equality and sustainability for future generations.

Gautam said while Secretary-General Antonio Guterres was severely constrained from taking some bold initiatives during his first term due to fear of the veto-wielding and chest-thumping Trump administration’s non-cooperation, he should, in his second term, feel more empowered to act more decisively to push for the kind of bold vision he outlined in July 2020 in his Nelson Mandela Lecture: “Tackling the Inequality Pandemic: A New Social Contract for a New Era”.

The early and quick gestures of the Biden administration rejoining the Paris Climate Accord, the World Health Organization, the UN Human Rights Council, funding for UNFPA and COVAX and paying outstanding US arrears to the UN peace-keeping budget are all encouraging signs, he noted.

“The ball is now in Guterres’ —and his senior management team’s– court to harness the potential of the Biden administration’s goodwill to assert UN’s proactive role to help tackle the most pressing global challenges of our times”, said Gautam, author of “Global Citizen from Gulmi: My Journey from the Hills of Nepal to the Halls of the United Nations” (Nepalaya Publications 2018)

Thalif Deen, Senior Editor and Director at the UN Bureau of Inter Press Service (IPS) news agency, is the author of a newly-released book on the United Nations titled “No Comment -– and Don’t Quote Me on That.” Peppered with scores of anecdotes-– from the serious to the hilarious-– the book is available on Amazon worldwide. The link to Amazon via the author’s website follows: https://www.rodericgrigson.com/no-comment-by-thalif-deen/