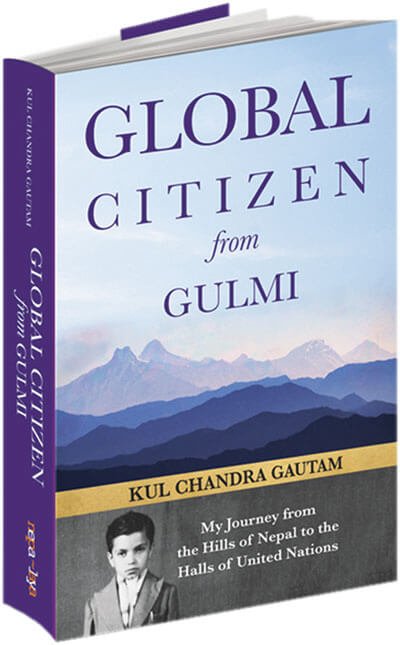 In the book, Gautam, 69, also documents the world events that took place at the turn of the century during his tenure as a senior official at the UN and his collaboration with many figures in the world. Starting as a Deputy Executive Director of UNICEF, Gautam went on to assume the position of Assistant Secretary General at the UN.

Speaking at the book launch, Pradeep Gyawali, the minister of Foreign Affairs lauded the book as a thought provoking read. “Gautam is a true winner,” Gyawali remarked, “From being deprived of basic necessities to reaching the doorstep of the UN, his journey is very moving. He is a true human rights leader and his passion hasn’t fizzled out.

I commend him for his humanitarian contribution.”

Former minister Nilamber Acharya also echoed Gyawali’s sentiments and said that the Global Citizen from Gulmi would be palatable not just for Nepali readers but a global audience as well. “50 years ago, Gautam started his journey for the betterment of the planet. I was impressed by him when we met in 1990. He never looked at his designations but he looked more towards how important and life changing his job could be,” Acharya said.

At the event, Valerie Julliand, UN Resident Coordinator also gave remarks on how Gautam’s journey from the impoverished Gulmi to New York was an inspiration for all.

This is Gautam’s second book after 2015’s Lost in Transition: Rebuilding Nepal from the Maoist Mayhem and Mega Earthquake.