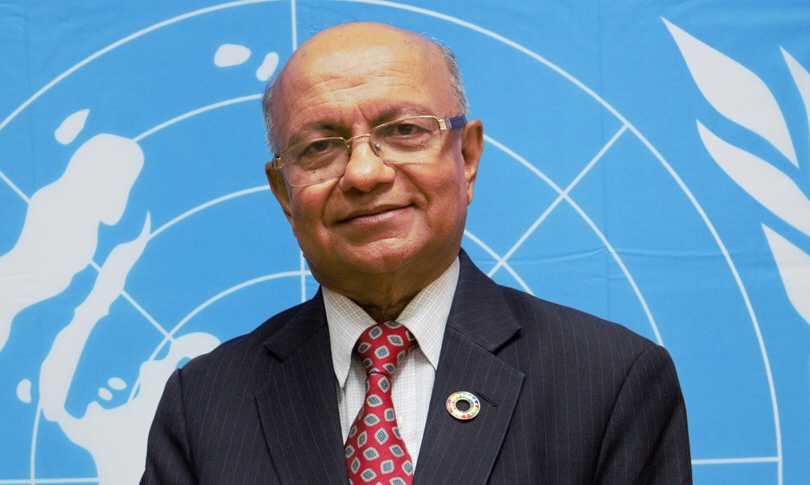 It is music to my ears that UNICEF USA has decided to make advocacy of child rights a flagship of its new vision and strategy in the US.

My sincere congratulations to our new President and CEO, Michael Nyenhuis for this bold initiative.

UNICEF USA has been a pioneering and visionary organization ever since it was founded in 1947 by the amazing Helenka Pantaleoni as the US Committee for UNICEF.

You may think that things are exceptionally difficult these days because of the divisive and polarized politics in the US.

Yes, the current atmosphere of “America First” unilateralism makes it hard to mobilize support for the UN and UNICEF – even for saving the lives and protecting the health and wellbeing of children.

But let me remind you that your predecessors faced an even more divisive and scary period in the 1950s, at the height of the McCarthy era.

The witch hunt of that period was also replete with hate speech and accusations of “hoax and fraud” and the specter of Communist-socialist infiltration of America. Jim Crow and segregation, even lynchings, were the horrific expression of the structural racism being protested down to the present.

Yet even at the height of the Cold War, Pantaleoni and her band of friends of UNICEF managed to convince American citizens and the US Congress to provide substantial funding for UNICEF.

Thanks to that glorious legacy, the US still continues to be the number one donor to UNICEF.

Raising funds for global UNICEF is one important measure of your success.

But I believe that UNICEF USA can and needs to do something else that is potentially even more important.

And that is to help transform the United States of America into a model of a truly child rights-friendly society.

If the US becomes a truly child rights-focused society domestically, I have no doubt that it will automatically become the world’s most generous and compassionate Super Power globally.

A nation flourishes if its people are healthy, well-educated, open-minded, respectful of diversity and imbued with the spirit of enterprise and innovation.

To cultivate such flourishing, we must start with children, when they are very young and impressionable.

America is a nation of extraordinary wealth.

But studies by highly respected American NGOs such as the Children’s Defense Fund, and by UNICEF itself, show that a shocking number of children continue to lack the basics of life.

While American kids are better off than most kids around the world, they lag behind most children in other industrialized nations in many respects.

The US is towards the bottom of the league in child poverty, in the gap between rich and poor, teen birth rates, low birth-weight and childhood obesity, infant mortality, child victims of gun violence, and the number of minors in jail. And the statistics for Black and other minority children are simply shameful.

For many people outside the US, it is incomprehensible how the richest nation on earth lets every fourth child live in (relative) poverty, how one child is killed by guns every three hours; how so many children and families can live without basic health insurance and guaranteed parental leave upon the birth of a child.

It is equally difficult to understand why a nation that can afford two billion dollars a day in military spending, and trillions of dollars to bail out huge Wall Street banks and corporate giants, cannot rescue its children from sickness, low levels of literacy, homelessness and violent crimes.

There is obviously something wrong in US public policy that allows such contradictions, given that ALL parents strive for the best for their children.

And that is where I see UNICEF USA, in partnership with other like-minded organizations, showing the way for promoting the concept of child rights as central to American democracy, just as UNICEF tries to do globally.

Is it too much to ask or expect that in the world’s richest country, fulfilling such basic needs of children should actually be a right of every child – not a voluntary option for parents or a charitable gesture of governments or NGOs?

Recognizing that children have rights, not just needs, is at the heart of the rights-based approach to development.

The Convention on the Rights of the Child reflects that ethos.

The CRC recognizes every child’s right to develop physically, mentally and socially to his or her fullest potential, to express his or her opinions freely, and to participate in decisions affecting his or her future.

Sadly, the United States is the only country in the world that has not yet ratified the CRC. And given the highly polarized political situation in the US at present, there is little chance of it being ratified any time soon.

Unfortunately, the CRC has not been properly understood or correctly explained to the American people. Many Americans have been led to believe that children’s rights are somehow at odds with family values and parents’ rights. But I can tell you from 30 years of experience worldwide that the CRC is fully consistent with such values and rights.

I believe this can be demonstrated by pursuing a child-rights based approach that can command broad popular support in the US. And a good place to start is with the Child-friendly Cities Initiative (CFCI) – which I was delighted to see UNICEF USA launched several weeks ago.

Globally, UNICEF launched the CFCI in 1992 at a conference of “Mayors as Defenders of Children” in Dakar, Senegal.

It was part of the follow-up to the historic World Summit for Children in 1990.

I was personally and professionally deeply involved in the early stages of conceptualizing and promoting the “Child Friendly Cities” initiative. It was part of a larger campaign of “Baby-Friendly Hospitals” and “Child-Friendly Schools” we were promoting then.

Many mayors found these initiatives very inspiring and appealing. Research has shown them to be quite transformative, even amidst countervailing social and economic trends.

Currently, the Child-Friendly Cities initiative operates in hundreds of municipalities in nearly two dozen countries, in both the global north and south. I believe that a similar initiative would resonate well in many American cities.

With a little bit of humility, Americans could learn from the CFCI experience of other countries and outperform them with unique American ingenuity.

I believe that UNICEF USA can be an effective facilitator of CFCI, starting with a small number of cities at the beginning, and gradually expanding to cover most municipalities, let’s say by 2030.

I hope you will all agree that the post-COVID American normal must aim to transform America’s cities where so many children fall through the cracks into child-friendly cities – where children are entitled to free health care, free pre-K to college education, and having a roof over their head – as the new norm.

The inequalities and injustices brought into sharp relief by the pandemic have sparked a hunger for change that CFCI can help harness – even without explicitly waving the flag of child rights.

In the spirit of child rights, CFCI should not be an act of charity but one of solidarity.

It should not be an act of benevolence by adults but involve the active participation of children and young people themselves in determining how they want to transform their cities and neighborhoods.

We adults often underestimate kids’ ingenuity to come up with practical ideas to solve their community’s problems.

At UNICEF we have been inspired by the fresh ideas and innovative solutions young people propose when they are consulted. That is why UNICEF Executive Director Henrietta Fore has rightly placed participation of the young generation at the center of her leadership.

In many countries UNICEF and other like-minded organizations have helped establish children’s parliaments to facilitate young people’s participation in democratic and participatory decision-making processes.

Many adult parliamentarians have been deeply impressed by the quality of discussions and soundness of recommendations coming out of these children’s parliaments.

Indeed, many municipalities have lowered voting age to 16 years as part of their child-friendly local governance.

So, what kind of activities should we promote in US cities selected for CFCI?

It is not for a retired “outsider” like me from the other side of the planet to advise you. But I would humbly suggest that instead of offering any preconceived proposals, please help organize open consultations with young people and solicit their ideas. I bet you will get lots of great ideas when they open their hearts and minds.

UNICEF USA can share methodologies for such consultations learning, for example, from the CFCI experience in several European countries sponsored by the UNICEF National Committees.

I guarantee to you that such consultations will produce many good ideas and proposals.

To make them practical and palatable to Mayors and City Councils, consultations should also include them, and elected officials of different political persuasions.

You will be surprised how such consultations will lead to unforeseen consensus on improved policies, services and even reallocation of city budgets.

Instead of partisan debates, consultations led by children and young people will help forge common sense consensus across party lines.

This will be the embodiment of local governance with a human face – with the best interest of children at the heart of political consensus. Just organizing them locally and sharing the results on social media will send ripples of influence up to the state and even national levels.

I sincerely believe that such a dream is within reach. If ever there was a time when reachable dreams are needed, here and everywhere, it is now.

And it will be a feather in the cap of UNICEF USA to unleash the power of such a dream.

Thank you, and best wishes.