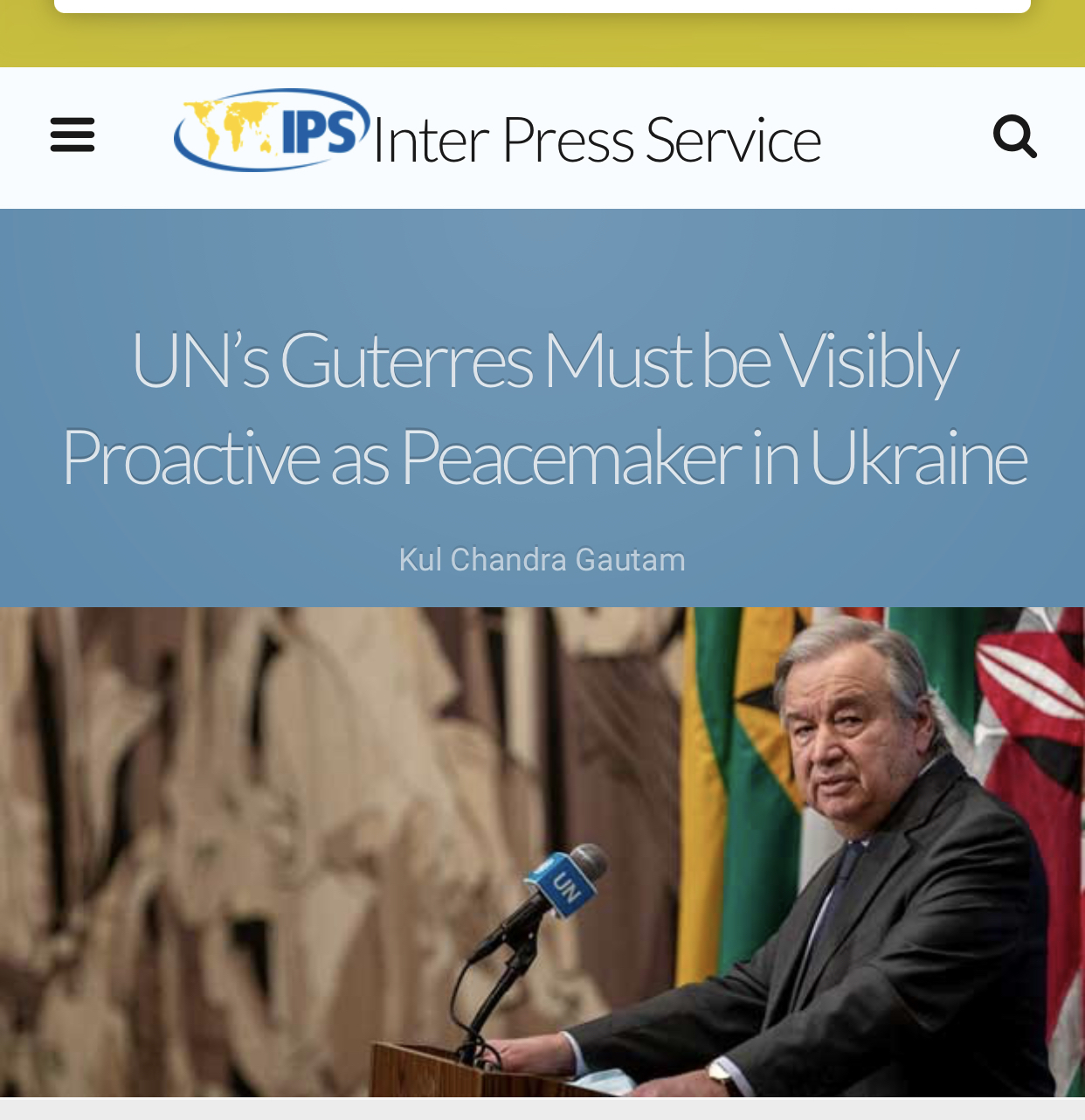 KATHMANDU, Nepal, Mar 22 2022 (IPS) – In an opinion piece published in PassBlue on 15 March 2022, historian Stephen Schlesinger asked, “Where is the UN’s Guterres?” as Vladimir Putin’s unprovoked war on Ukraine has been dominating the world’s headline news.

Schlesinger is a good friend and close observer of the UN, and author of the award-winning book: “Act of Creation: The Founding of The United Nations”. Like Schlesinger, many of us who are strong supporters of the UN and who watch the deliberations at the world body closely, do know the answer to his rhetorical question about the whereabouts of the UN Secretary-General Antonio Guterres.

He is currently between a rock and hard place faced with the blatant violation of the UN Charter by a powerful Permanent Member of the UN Security Council. Many of us consider Guterres as a highly qualified statesman and the world’s top diplomat with impeccable credentials and a sober leadership style.

Understandably, he had to be extra cautious and could not take bold initiatives during his first five-year term, as he had to tread carefully in a world dominated by an erratic and dangerous Donald Trump in the White House, a devious Vladimir Putin in the Kremlin, a resurgent Xi Jinping in Beijing and several other populist demagogues and autocrats like Jair Bolsonaro, Recep Tayyip Erdogan and Boris Johnson with their antipathy towards multilateralism.

Now in his second term, Guterres is freed from the fear of not being re-elected and can afford to be more courageous and visibly proactive when the stakes for the UN’s credibility and effectiveness are high, given the threat to international peace and security posed by Putin’s war of choice in Ukraine.

To his credit, Guterres did not mince words in deploring the Russian invasion of Ukraine as a violation of the UN Charter both at the UN Security Council and the General Assembly. He even warned that the prospect of nuclear war was now back within the realm of possibility. And, he pleaded with Putin to stop the war and offered his good offices to help resolve the crisis peacefully.

It is understood that Guterres has also been in close contact with leaders of China, France, Germany, India, Israel and Turkey, among others, on mediation efforts to bring an end to this horrific war. This is all commendable.

But in an era of the 24/7 news cycle and the pervasive social media, the UN Chief’s remarks from his UN perch and his quiet diplomacy with influential member-states are necessary but not sufficient. The world’s general public – and especially the people of Ukraine and Russia – don’t see the UN leader being visibly proactive outside the glasshouse of UN headquarters in New York.

Guterres has been outspoken in highlighting the catastrophic humanitarian crisis caused by the war in Ukraine and has taken a leadership role to mobilize international support for humanitarian assistance.

In an opinion piece entitled “War on Ukraine also an Assault on World’s Most Vulnerable People and Countries” published by the IPS News on 15 March 2022, Guterres warned about the grave consequences and negative ripple effects of the war in Ukraine on the world economy, and in particular, the developing countries.

His plea to world leaders to resist the temptation of increasing military budgets at the expense of Official Development Assistance (ODA) and climate action, are also right on the mark.

The UN’s humanitarian agencies like UNHCR, UNICEF, WFP, WHO, etc. are doing a heroic job to provide life-saving assistance both inside Ukraine and in its neighboring countries deluged with millions of refugees. These UN agencies and many non-governmental organizations (NGOs) have honed their skills to mobilize resources and implement humanitarian assistance quite effectively over the decades.

Where the S-G’s leadership is needed most and is being tested publicly is not so much on humanitarian assistance, but in preventing and ending wars that are the root causes of the humanitarian crisis.

The global public sees and judges the S-G’s effectiveness on what it considers as his job number #1, “to save succeeding generations from the scourge of war”. Guterres is no longer the UN High Commissioner for Refugees, but the world’s top diplomat and guardian of international peace and security.

There have been many wars in the 76-year history of the UN, but the Russian invasion of Ukraine stands as the gravest challenge to the post-World War II international order as one of its guardians and a Permanent Member of the UN Security Council has struck at the heart of its architecture by threatening a nuclear conflagration and a potential World War III in the ramparts of the Second World War.

The UN has played an important role in mediating peace processes, organizing humanitarian ceasefires, helping to maintain peace through peacekeeping and peacebuilding missions in many inter-country and regional wars and conflicts.

But it has so far appeared helpless when the vital interests of its most powerful veto-wielding superpowers like Russia and the US are involved.

The Big Powers – the P-5 – often see the S-G as merely the “Chief Administrative Officer” of the UN, and as such subservient to world leaders, foreign ministers and ambassadors as the “governors” of the organization in the GA and SC.

However, “We the peoples of the world” regard the S-G as a world leader and the world’s top diplomat in his/her own right. After all, according to Chapter XV of the UN Charter, the Secretariat led by the S-G is akin to the principal organs of the United Nations. And the Charter gives the S-G sufficient leeway to take initiatives.

Apropos the old debate on whether the S-G is merely a “Secretary” or a “General”, the world’s Big Powers may see him as just a “Secretary” but “we the peoples of the world” wish to see him as an unarmed, Pacifist “General” and a world leader.

In an era of shuttle diplomacy, when we see Macron, Scholz, Johnson, Erdogan, Naftali Bennet, Blinken, et. al. conferring in Moscow, Brussels, Berlin and Washington, why don’t we see Guterres there, or hear about him calling or writing to Putin, Biden, Xi Jinping and Zelensky?

If the leaders of Poland, Czech Republic and Slovenia dare to risk visiting Kyiv in the midst of shelling to show their solidarity, surely Guterres, the world’s top peacemaker and coordinator of humanitarian assistance should be seen there too.

Guterres’ invisibility seriously undermines his and the UN’s credibility at this time of the greatest international security crisis since the founding of the UN in 1945, and certainly during his tenure as S-G.

I am pretty sure that in similar circumstances some of his more courageous predecessors like Dag Hammarskjold, Kofi Annan and even the otherwise quiet U Thant and the voluble Boutros Boutros-Ghali would have been more visible and outspoken.

We are all mindful of the limitations and constraints that the UN leader faces in dealing with crises involving strong vested interests of the world’s veto-wielding superpowers. The S-G can do nothing about changing the veto-power structure agreed and understandable in a different era, but which has now become an indelible birth defect of the UN Charter.

However, in the case of the Ukraine crisis, the S-G can and ought to be bolder and visibly more proactive, taking strength from the fact that the aggressor power is completely isolated and has become a virtual pariah.

Not even a single other member-state in the Security Council supported Putin’s justification for his attack on Ukraine. And in the “Uniting for Peace” resolution at the UN General Assembly, an overwhelming majority of 141 states denounced the Russian invasion and called for immediate end to the war, with the aggressor getting the support of only four notoriously autocratic pariah regimes.

These UN resolutions, and the world’s public opinion, give valuable moral mandate for the S-G to play a proactive and visible role as the world’s premier peacemaker.

I have no doubt about Guterres’ competence and commitment. But sometimes I worry about his (lack of) courage. Even if his efforts fail, he should dare to go down in history as someone who took the utmost risk for peace, rather than someone who was too timid to the point of making the UN appear like totally impotent or irrelevant.

There is always a place for behind the scene, quiet diplomacy in international relations. But that is not good enough for the UN’s credibility in this day and age when the world’s eyes are on Ukraine and people all over the world are asking “Where is the UN?” when its very raison d’être is being rudely challenged by one of its major founding member-states.

Kul Gautam is a former Assistant Secretary-General of the UN; Deputy Executive Director of UNICEF; and author of “My Journey from the Hills of Nepal to the Halls of the United Nations”. (www.kulgautam.org).